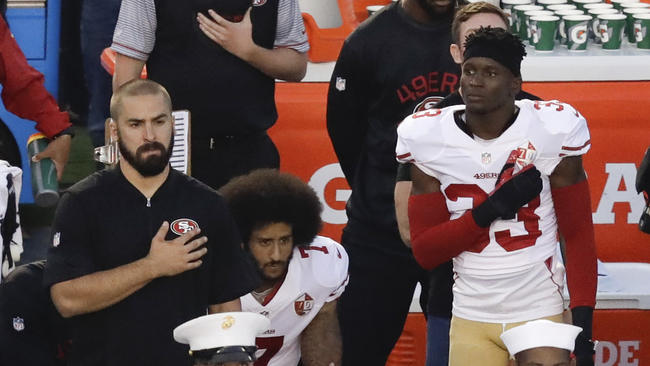 The wicked, poisonous flower that is Modern Liberalism is now in full bloom in present-day America. It grows on the tree of Progressivism, found only deep in the forests of Statism. While Statism takes many forms- many of which were seen in the 20th Century- it can only grow strong when the roots of Liberty are shallow, have withered, or have died.

In today’s America, Liberty is withering and the People are docile, only agitated by matters that keep them within the confines of Statism. Liberty is a forgotten ideal which fails to attain significance.

Today, people have chosen to follow the voices of athletes. It’s not that athletes are inherently unintelligent:  they are not; but athletes are recruited and paid for their physical, not mental, prowess. When athletes are held in esteem- or even given attention- due to their political stands, it is a sign that the Republic is in peril. The shallowness of the People can be measured as directly proportional to the influence given to celebrities and athletes.

We have heard, repeatedly, that these athletes have the Constitutional right to not stand during our National Anthem. No. They have a God-given right not to stand. The Founding Fathers never pretended to grant the right to speak or move. They did affirm that citizens have the right to engage in political speech contrary to the belief or position of the government. So when you hear someone say that these athletes have the right not to stand, dismiss them; no one is questioning their God-given rights.

On the other hand, in a free country, the right to do something does not make that ability suddenly a wise act. Matters of respect, wisdom, and morality come into play, and that which is legal is not necessarily that which is advisable, wise or moral.

The lack of education in our country is catching up to us. When a liberal writer last month wrote that one of the stanzas in the Star Spangled Banner celebrated the blood of slaves held in America, the progressives started spraying the scent of their poisonous flower. Citizens dutifully nodded in ignorance, knowing nothing of Francis Scott Key’s words; of British impressment (slaves), which played a factor in commencement of the War of 1812; of the British habit of hiring mercenaries (hirelings). Just believe what you are told and move along; support the progressive causes.

Today, athletes are gaining attention for setting the agenda to which we should follow. Never mind that nearly every liberal mantra has been proven false:  “hands up, don’t shoot” (Michael Brown); “he was a good kid” (Trayvon Martin); “my son is gone due to the police” (Sylville Smith, Milwaukee). While the Martin case did not involve the police, dishonesty was used to stoke the fires of racism in order to convince a segment of the population that they need to further causes that separate us more and more as a people.

On the one hand, we should not concern ourselves with what athletes think. It’s not that they are all unintelligent, but there are no collections of brilliant quotations from athletes which will resonate through the ages or books of poetry celebrating athletes’ contributions to thought, Liberty, science, or the like. On the other hand, refusing to put one’s hand over his heart or to stand at attention during the National Anthem is a sign of disrespect to the flag and everything the flag represents. This disrespect is worsened when one considers that celebrities in modern society are followed and quoted as if they really are philosophers. People listen to celebrities and blindly follow them. If you don’t believe that, do tell how many people refused to stand for the Anthem last season.

The level of ignorance displayed by these athletes is not any worse than the average American:  clueless about the source of their own rights and strangers to Liberty. For example, do these athletes have a legal right to protest the National Anthem? When they wear the uniforms of their respective teams, which are licensed by the National Football League, they only have the right to protest if given the right by those whom they represent. It is a different subject from God-given rights.

The problem is that judges, in various legal cases, have taken away rights of organizations as it relates to how people represent them. Either the league has the right to say that players may not behave in certain ways when wearing NFL uniforms, or Liberty has been eroded. This erosion eventually impacts all of us. Soon our own property is not really ours, rather it is subject to the whims of judges and the government.

Unfortunately, Black Americans have followed people such as the corrupt Jesse Jackson or the comically fake Al Sharpton. Sharpton appears to be the same man that he was in his Tiwana Brawley days, and both Jackson and Sharpton need racial turmoil in order to score paydays. Racial harmony is anathema to race baiters. If it were not so, then the pair would have been leaders for four decades, encouraging young people about how to respect their families, respect society, and how to better prepare themselves for the job market.

In other words, they would be preaching the words of great Americans such as Black economists Walter Williams and Thomas Sowell- two men, among many, who have urged Black men to be positive role models in their communities.

Denigrating the police is not a positive act; giving back to their communities and encouraging positive, law abiding behavior is positive. This seems to escape some of the attention-grabbing NFLers.

But perhaps all of this is too deep for The People, who fail to know the difference between rights and privileges; good behavior and bad; Liberty and, dare I say, slavery. Of course, modern America only understands slavery as a concept of early America; nothing else.

Black Americans are no different than anyone else in world history:  they are susceptible to the wiles of that sweet smelling flower that lures free people away from the trees of Liberty. The progressives lie in wait, ready to take control:  to wield power over, to take care of, to tend to the needs of the unsuspecting. The People- not just Black Americans, but all Americans- are in peril of perishing for lack of knowledge. Is there any doubt that the likes of Williams and Sowell would have served Blacks better than the likes of the NFL players making their uninformed “statements?”