“If Congress can do whatever in their discretion can be done by money, and will promote the General Welfare, the Government is no longer a limited one…”   James Madison

When studying the political formation of the United Sates, one is struck by the recurrence of the checks and balances theme—in Madison’s convention notes, the Constitution itself, the Federalist Papers, the minutes of the ratification conventions, and even in the Anti-Federalist papers.  There can be no doubt that the Founders believed that liberty depends on each part of the government acting as an effective check on all the other parts.  That meant not only checks between the three national branches, but also between the states and the national government.

The Founders distrusted direct democracy, because majorities historically have taken advantage of minorities.  They believed that a limited representative republic was the best form of government to safeguard minority rights.  James Madison constantly preached against any system that allowed special interests (factions) to gain control of major elements of the government.  He showed that throughout history, majority factions tyrannized minorities, whether those minorities were based on race, wealth, religion, political affiliation, or even geography.

However, for the Founders, checks and balances were not enough.  They also wanted to specifically define powers to limit the intrusion of government into personal lives.  The Constitutional Convention looked at two different ways of defining national powers.  They debated long and hard about whether to call out each power individually or, alternately, to list restrictions on general powers.  Basically, they had to decide whether to write down what the federal government could do or what the federal government could not do. 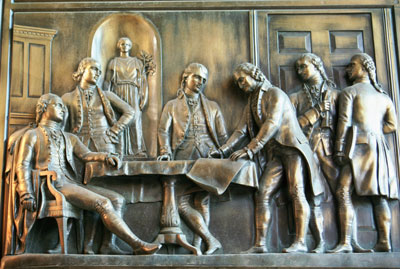 Because they feared they might forget some crucial restrictions, the delegates decided it was safer to define the powers, instead of the limitations.  In contrast with monarchies, which had general power, the delegates would give their national government only delineated powers.  The Founders’ intent remains clear: if a specific power was not expressly listed in the Constitution, then that power remains with the States or with the people.  They decided this was the safer route because if they made an error, it would leave authority closer to the people. This made sense because the people owned the power anyway.

The delegates also decided to choose members of each branch of the national government by different means, so it would be difficult for one faction to gain control over the whole government.  The House of Representatives would be elected directly by the people, the state legislatures elected Senators, the president would be chosen by an Electoral College, and the Supreme Court would be appointed by the executive and confirmed by the Senate.

Political power frightened the Founders.  They believed that only by limiting government powers could liberty survive the natural tendency of man to dictate the habits of other men.  Unfortunately, our modern politicians do not feel restrained by the Constitution and they have gathered up nearly all political power in Washington D.C.

James D. Best is the author of Tempest at Dawn, a novel about the 1787 Constitutional Convention.