What is our republic?  Not what IS a republic…what is OUR republic?

I’d select “None of the above.”

Our Republic is an idea, it is in our hearts.  Those of us who are Christians maybe understand this better.  There is something greater than each of us that holds us accountable; we exercise self-restraint, and are personally responsible.  We understand that most of our reward is delayed, so we have to make the decision daily to live in a way to attain the goal.  We also understand what we have can be lost.

I see our Republic in much the same way, and I believe our founders did, as well.  There are numerous quotes by our founders indicating that our form of government is suitable only for a just and moral people.  Ben Franklin, probably our least religious founder said, “Only a virtuous people are capable of freedom.  As nations become corrupt and vicious, they have need of more masters.”

So just who is the ONE person who can save the republic?  Ted Cruz?  Donald Trump?  Hillary Clinton?

No.  The one person is you.  It is me.  It will take all of us working together.

Each of us  MUST become the people of which Franklin spoke.

We hold these truths to be self-evident, that all men are created equal; that they are endowed by their Creator with certain unalienable rights; that among these are Life, Liberty, and the pursuit of Happiness; that, to secure these rights, governments are instituted among Men, deriving their just powers from the consent of the governed; that whenever any form of government becomes destructive of these ends, it is the right of the people to alter or to abolish it, and to institute new government, laying its foundation on such principles, and organizing its powers in such form, as to them shall seem most likely to effect their safety and happiness. – from the Declaration of Independence

We are each born with rights and we form governments to secure those rights.  If we are the good people required by both God and our government, then we do not need government strong arm tactics and programs.

Pure religion and undefiled before God and the Father is this, To visit the fatherless and widows in their affliction, and to keep himself unspotted from the world. – James 1:27 KJV

It is OUR job to care for our neighbors; yet, we did not and have not, and left that for the government. That is not its job.  Is it the fault of LBJ that we have the “Great Society,” and have spent nearly $20 trillion in a futile effort to stop poverty?  I would say no, it is OUR fault for allowing it to happen…to think we should allow the government to do our job.

Number one, change ourselves.  Just as a drug addict or alcoholic has to make a complete change in their lives, make a clean break with the old habits, so must we.  We have allowed the notion that we can work hard and then vote and have our free time to do as we please become the norm. 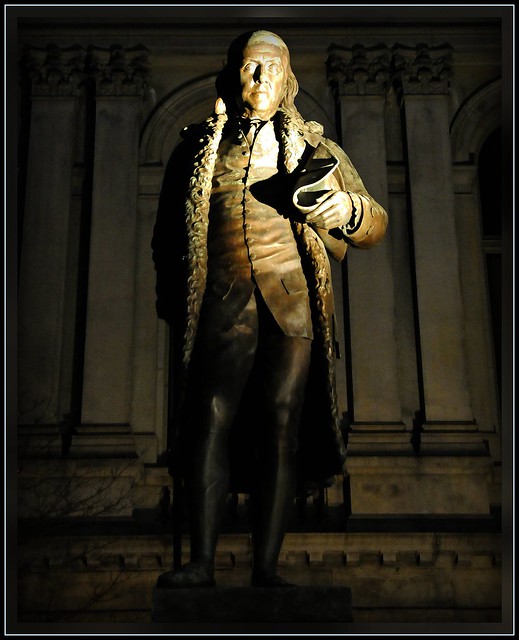 Mr. Franklin was one of the wealthiest men in America at the time.  Did you know that in the day the number one cause of death for women was burning to death?  They cooked over open fires and their dresses would catch fire.  He invented the “Franklin Stove” for heating and cooking, and gave the patent away so that anyone could make them and keep the cost down.  The first hospital in the nation was in Philadelphia, the Pennsylvania Hospital founded  in 1751 by Dr. Thomas Bond and Benjamin Franklin “to care for the sick-poor and insane who were wandering the streets of Philadelphia.”  It was privately funded.

We can look all day at examples, but once the point is made, we need to look to the solution.  The premise of my book, Spare Time, besides entertainment, is to try and motivate people to get out of their comfort zone and do something.  While we all are busy, we normally can find the spare time to do what is really necessary, and what is more necessary than saving our republic?  We seem to have the notion that we can work to a certain age and then relax in retirement.

Luke chapter 12 is full of warnings against those who think they have nothing further required of them.  The idea that we can get to a certain age or state in life and no longer have responsibilities to our fellow man is a message from Satan himself.

After several generations of government and social dependency, the vast majority of Americans are woefully ill-prepared to care for themselves let alone others.  It will take a generation of diligent effort by many to turn this around.  It is not enough for us to help our own family, we must be good neighbors in the community.  Obviously, we cannot possibly reach everyone and not everyone will be receptive.

In my book, these efforts did not prevent the eventual collapse which was the result of a perfect storm of US and world events. However, it did enable many to survive and be prepared to start things back up in the right direction.  We have allowed our schools to become indoctrination centers, we need to break into that.  There are private organizations that are working to teach students the things they do not get any more- lessons on our founding and basis on God-given values, personal and civic responsibility.  I recommend www.founderskeep.org if you are not aware of where to turn.

We also must work closer to home on changing our government.  As I watch our current presidential election, it seems we are fighting over who will be king.  If you believe a president will either destroy or save the nation, then you expect the president to be a king.  The Convention of States Project just last week did a practice dry run Article V convention.  It demonstrated how returning to our constitutional roots is the answer.  I recommend everyone go to www.conventionofstates.com.  There are tabs to educate you, your family and friends, there is a FAQ tab and the entire day of debate from the practice convention.

Going to the lake, family picnics, zoos, and museums are all fun and good for us in their own way.  But perhaps we should shift our family time to things better suited to our long-term survival…emotionally, physically, nationally and spiritually.